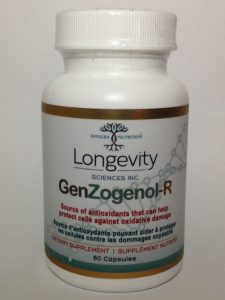 Each bottle contains 60 capsules: recommended dosage is 1 capsule twice a day – the dosage can be safely doubled for acute conditions.

GenZogenol-R is designed to work on and is the base product for our healthy aging protocols.

Enzogenol®, our key ingredient is expertly blended to primarily impact on DNA/telomere/methylation health with potent healthy aging properties. Primary characteristics of the synergistically blended ingredients maximize the healthy aging effects of this formulation.

The formula is a highly potent antioxidant combination of ingredients proven to provide the following health benefits:

This formula has a positive impact on the following Biochemical Pathways / Metabolic Control systems:

AMPK (5’ adenosine monophosphate-activated protein kinase) is found inside every cell and serves as the body’s “master regulating switch”. Research to date has shown:

NF-kappaB is a protein complex found in almost all animal cell types that controls transcription of DNA, cytokine production and cell survival and plays a key role in regulating the immune response to infection.

Nrf2 Pathway has been referred to as the master regulator of antioxidant, detoxification and cell defense gene expression. This pathway regulates the expression of a set of antioxidant and detoxifying genes, protecting the body from oxidative stress-related conditions, including (but not limited to) those affecting the brain and nervous system.

Calorie Restriction Mimetic (CRM) properties refers to ingredients that mimic caloric restriction (CR) which has been shown to provide significant anti-aging benefits in animals and humans.

PPAR gamma (peroxisome proliferator-activator receptors) is a protein that binds to DNA to increase gene expression.

A number of in-house and independent studies on Enzogenol® have demonstrated its numerous health benefits. This list is too lengthy to fully detail here but here are a few examples: it has been used extensively for Traumatic Brain Injuries (TBI’s); vascular, skin and eye health; cardiovascular disease; and neurological health. On request, we can provide links to a number of these studies and their findings. Case studies are available.

The most dramatic observation is the ability to lengthen telomeres (in a rat model) by over 40%! The following link describes this study…View YouTube video on this telomere lengthening clinical study.

Resveratrol is unique amongst antioxidants because it can safely cross the blood-brain barrier to help protect the brain and nervous system. There is extensive research on this ingredient and many of its effects are similar to Enzogenol which further strengthens the potency and benefit of this formula.

Pterostilbene is referred to as a methylated Resveratrol compound that is similar to and supports the benefits of Resveratrol and has a higher bioavailability and a longer period of activation in the body. It occurs naturally in blueberries and has been used for thousands of years in Ayurvedic medicine as a “blood tonic”.

Quercetin is a flavonoid commonly found in fruits and vegetables and it impacts many of the factors and conditions associated with aging. As with each of our ingredients, it is supported by abundant research and it is known to address:

For more information, we have a number of resources including the following link: Green Tea – Protection From DNA Damage

Astaxanthin is a carotenoid, related to beta-carotene, lutein, and canthaxanthin, and works in several unique ways. Although most other antioxidants are depleted after they’ve transferred their free electrons, astaxanthin has a massive surplus, allowing it to remain “active” far longer.

Also, it can quench a number of free radicals at any given time by forming an electron cloud around the molecule. This is known as the electron dislocation resonance. When free radicals try to steal electrons from the astaxanthin molecule, they’re simply absorbed into and neutralized by this electron cloud all at once. Research has demonstrated that Astaxanthin reduces oxidative damage to DNA by 40% (even at low doses).

Lecithin contains fatty acids that can activate gene controlling receptors (PPAR Gamma – peroxisome proliferator-activated receptors). Once activated, these receptors play a major role in energy balance and metabolic function. Amongst its many health benefits, of note are the following: it improves cholesterol levels, benefits the brain, improves immunity and protects the liver. It also improves absorption of supplements and drugs.

Contact our office to for further references and research links.

Speak To A Sales Associate

Integra Nutrition is currently partnering with qualified clinics to carry our revolutionary and patented products. Complete the form below and one of our sales associates will reach out to you.